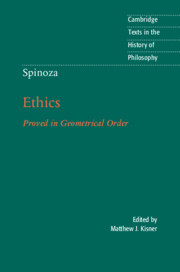 Part of Cambridge Texts in the History of Philosophy

Add to cart Add to wishlist

Looking for an examination copy?

This title is not currently available for examination. However, if you are interested in the title for your course we can consider offering an examination copy. To register your interest please contact collegesales@cambridge.org providing details of the course you are teaching.

also by this author